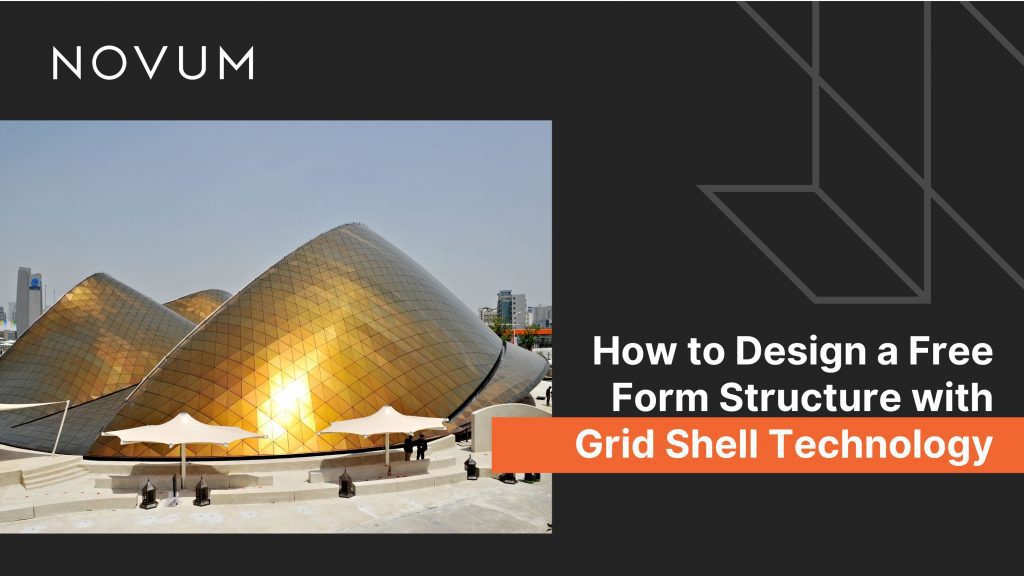 Free form structures created with grid shell technology are a great example of this unique style of design and have become more popular over the last decade.

The main reason for their rise in popularity is the advent of computer-aided design software. Commonly known as CAD, this software allows architects to design grid shell panels that point in two different directions. This innovation changes the aesthetics of free form structures to have organic, faceted shapes rather than spherical structures.

In this blog, we highlight how we created our organic-shaped grid shell structures in the United Arab Emirates. We use the natural beauty of the desert as a springboard for the buildings’ unique and memorable design.

What is CAD and NURBS, and Why Does It Matter for Free Form Architecture?

NURBS are integral to CAD. But what are they? NURBS stands for “Non-Uniform Rational B-Splines.” B-splines, or basis splines, are polynomials. With accurate measurements of B-splines, designers in a wide variety of industries from computer animation to architecture can use CAD to create virtually any shape. The CAD software makes the calculations utilized by the engineers and contractors to design the building.

A grid shell structure uses a lattice configuration as its envelope, which is then held up by various columns. The double curvature shape of grid shell structures is the source of its own strength, but prior to 2012, the mechanics of shell system architecture were largely unknown and underutilized.

To understand further, these envelopes are made of either double-paned windows or insulated metal panels. The windows or panels use nodal connections in the overall freeform structure and the facet joints. Because of the many components integrating together in freeform structures, architects, engineers, and contractors need to work closely together to ensure stable and beautiful results.

Our pavilion structure in the UAE takes its inspiration from the desert biomes of the UAE. With a near-circular footprint of 65 meters across, the three structures possess the features of a naturally occurring sand dune, shaped by steady desert winds. The windward sides are curved with flat leeward sides and sharp ridges. On the northern half of the building, two of these dunes reach a height of 18 meters, and the neighboring southern dune reaches a height of 20 meters.

Visitors enter from crescent shaped cantilevered canopy structures that are above the northern and southern building entrances. Both dunes share a central spine structure, and two types of structures comprise the windward and leeward sides. Single layer freeform grid shell structures frame the windward dune side. On the side sheltered from the wind, louver structures with vertically inclined straight I-beams are braced by smaller horizontal members.

How to Ensure Structural Efficiency of the Free Form Grid Shells

In order to maximize structural efficiency, the spine and canopy structures are integral components. The combined lateral and vertical stiffness of the spine, canopy, and grid shell edges ensure the integrity of the shell structure. A series of I-beams, at times spatially curved and arched, also support the structure.

The spine is made of stiff portal frames. These “vertebrae” are spaced every six meters and are connected by two arched I-beams. These arches are densely braced in formation with their end points fixed to the foundation.

The canopies are crescent shaped along with another pair of arch shaped I-beams at the edges. One of these arches is held by the entrance wall columns, and the other canopy arch beams are interconnected by straight beams, which utilize a momentary connection to the entrance wall columns whenever possible. Since the canopy arches are also fixed to the foundation, a rigid tension ring belt supports the dune structures from above.

The dunes’ ridges are made of curved, large diameter pipes that run the length of the structure. At the northern freeform grid shell, two spatially curved I-beams support the structure at the double dune’s inflection zone. These support beams span from the spine’s edge to two vertical columns underneath the northern ridge.

A reinforced concrete stripe foundation supports a number of each dunes’ features including:

The initial design by Halvorson & Partners required square tube members that measured 200 by 200 by 6 millimeters. With this size, however, the node connectors would have been too large. As a way to meet this size consideration, the cross-section of the freeform members changed to rectangular tubes measuring 240 by 80 by 8 millimeters of steel grade Q345. Q345 is a weldable steel grade that the support nodes are also made from.

The proprietary freeform node connector uses two forged steel (grade #45) discs with machined faces that have one threaded hole. These node connectors are precisely inclined toward each member end, where special precision cast steel adapters (grade GS-20Mn5V) are welded. These members are bolted then to the top and bottom node discs from the machined faces using socket head bolts M24 or M27 (grade 10.9). These are then inserted into the adapters via small rectangular openings in the top chord of tubes and screwed down into the threaded holes located on the node faces. Before any bolt is fixed to the structure, they are pretensioned.

How to Develop a Grid on a Smooth Free Form Surface

To develop a grid on a smooth freeform surface, there are two methods: the planar grid projection method and the surface partitioning method.

The planar grid projection method projects a planar grid onto the smooth surface, similar to tracing a sketching on paper. This method works for surfaces with small curvatures, but frequently problematic nodes appear along the perimeter of the freeform grid. These problems occur when translated to real life conditions: member lengths may be too small, or the angles may be too tight between grid and perimeter members for practical realization.

The surface partitioning method works by developing the grid from the perimeter. All perimeter sections become subdivided by a constant ratio into similar lengths. These subdivisions match an “orthogonal,” or right-angle based auxiliary grid directly on the freeform surface. For use in the final grid, one direction of the auxiliary surface grid is selected. These grid elements serve as the final grid triangles’ base edges. Connecting the subdivision points with the adjacent triangle base edge’s two end points generates the final triangular grid. Ultimately, the surface portioning method minimizes problematic perimeter nodes.

Building a striking pavilion structure influenced by the natural beauty of the Arabian desert requires aesthetic sensibilities, freeform CAD software, and a team of architects, engineers, and contractors. When all these components work together like a chamber orchestra, the architect’s vision is realized, and a beautifully unique structure is created.

Read more about Novum’s other projects or reach out to one of our team members to learn about how our design team could meet your needs.

Please wait while you are redirected to the right page...