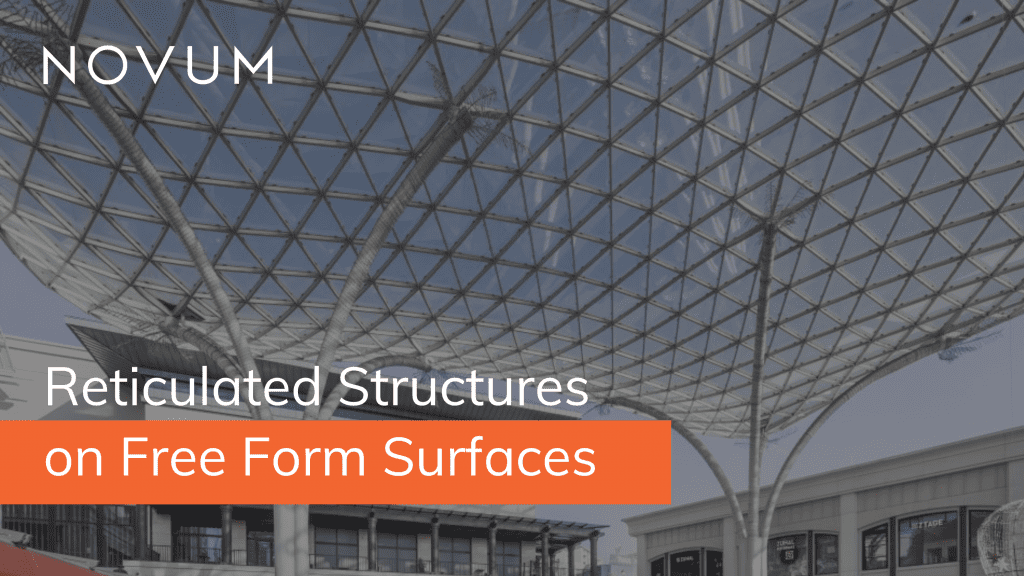 Reticulated Structures: Are They Structurally Sound?

Free form envelopes became more and more popular in recent years, after being promoted by buildings like the DZ-Bank in Berlin (Frank Gehry), the Arts Center in Singapore (Vikas Gore), the British Museum in London (Norman Foster) and recently the New Fair in Milan (Massimiliano Fuksas) with its roofs above the Central Axis and the Service Center.

This blog reviews the geometric and corresponding structural challenges related to the design of reticulated structures on free form surfaces.

The Impact of Surface Geometry

Surfaces are the skin of objects. We recognize the form of objects in our environment by visually perceiving their surfaces. Space can be defined and measured in terms of surfaces, which enclose and limit it. Surfaces are two-dimensional continuous shapes contained in the three-dimensional geometric Euclidean space. Thus, a surface constitutes a sort of two-dimensional world, which can carry geometric objects of various kinds, such as points, straight and curved lines and networks.

Surfaces can be specified and classified in various manners. Following the proposal of Gheorghiu and Dragomir [GHE78], surfaces for the building practice can be classified according to the value of their Total or Gaussian curvature and then sub-classified after their mode of generation.

Processes leading to the generation of a surface can be divided into geometric modes of generation and non-geometric processes involving a form-giving agent, for instance, earth gravity, air pressure or pre-stress. For construction purposes, one of the most convenient methods of geometrically specifying surfaces is to consider them as paths or traces of straight lines and curves. Here, straight lines are normally used to represent the axes of structural members, while the nodal points of the network of axes represent the midpoints of physical connectors or the theoretical intersections of the structural axes. It is worth mentioning that a large group of surfaces can be defined in terms of the so-called homothetic or dilative translation transformation [SBP94] [SBP02a] [SBP02b] where a reticulated or faceted surface is obtained by applying combinations of basic symmetry operations of translation and dilation.

Dilation expands and contracts onto the generating elements. A special feature of the homothetic transformation is that it can be used to generate reticulated structures with perfectly plane meshes by keeping the straight generating lines called generatrices parallel in 3D-space. Revolution surfaces can even be defined from a homothetic viewpoint if the circular polygons around the surface axis are seen as generatrices, which can be obtained from each other by centrally dilating to the rotation axis and sliding along the same line. A large number of ruled surfaces involve a further transformation, namely rotation. This leads to reticulated surfaces with non-planar facets, such as the hyperbolic paraboloid generated by translating a straight line along two skew lines in 3D-space, while remaining parallel to a directing plane.

The more general group of surfaces is that of free forms, whose geometric specification relies on the special mathematical procedures summarized under the name NURBS, which stands for non-uniform rational B-splines. NURBS-surfaces and -techniques allow the specification of practically any imaginable form. Unlike the algebraic surfaces, like the cylinder, the sphere or the various paraboloids, which can be directly specified by fixed equations, free forms or NURBS-surfaces require a complex construct of mathematical objects, like lines, curves and planes, formula and procedures. The culmination of these objects interacts to specify or create a new form in an iterative way. The practical form designer very seldom gets involved in the lengthy and complex mathematics of free form surfaces, but they make use of specialized programs [RHI03] where the abstract objects and functions of the mathematical system have been implemented as CAD-tools. Thus, these tools are used, even intuitively, to develop, construct and manipulate free form surfaces.

The designer normally starts by defining the boundary lines of the whole surface and then divides it into smaller simpler areas or patches, with the aid of lines and curves, to form a rough framework. Although simple lines and curves can be used to define the segments of the internal framework, a more frequently used curve is the spline, because it can describe any shape. The density of the framework is usually determined by the complexity and smoothness of the surface being modeled.

The internal patch boundaries are significant cross sections of the surface, and they are instrumental for the modeling of the patches. Form smoothness or “fairness” is the usual criterion to shape the curved segments and connect them at the nodes of the framework. The individual surface patches are then generated with surface generating functions or tools, which cover the whole inventory of individual geometric shapes. Once the surface patches are generated, the next action is to relate or connect them at their common boundaries in terms of curvature, smoothness, tangency or vicinity. In the end, the complete surface should appear as a continuous shape.

Free form surfaces in the design of building envelopes are usually complex and the definition of a final form, more than a simple modeling action, is a relatively long, iterative process of form modeling, function checking, correction and improvement.

Networks on free form surfaces for reticulated structures can be obtained in various ways, for instance by extracting networks of intrinsic curves from the surface, by parallel projection of an external planar network onto the surface or by any other kind of mapping or geometric construction on the surface.

The non-geometric modes of generating surfaces for structures are referred to by most authors [SFB96] as form-finding methods, which can in turn be subdivided into experimental and analytical or numerical methods. Hanging physical nets or fabrics, which is the traditional form giving source for compression grid shells and soap bubbles, points the way to shape pneumatic and pre-stressed textile membranes and cable nets with a minimal surface. These are well known examples of experimental form finding methods. The analytical form-finding methods, such as the “force-density” method and the “dynamic relaxation” method produce analytical minimal surfaces, are mainly numerical counterparts of the physical, experimental methods.

Prismatic structural members, such as T- or I-sections and rectangular or square sections, normally need to be placed and oriented with respect to the carrier surface. A network of lines usually defines the member axes in a reticulated structure and the nodal directs the midpoints of physical connectors or theoretical intersections between the axes of the members. A plane surface is obviously the simplest case, and the so-called local systems of the non-symmetric members can be readily set parallel or normal to the plane of the structure. If the carrier surface has a unique reference point or axis, like a point for a sphere or a straight line for a cylinder; then the non-symmetrical members and connectors can be oriented so that one of their local coordinate axes point to a single reference point or drop perpendicularly to the reference axis.

In the general case of free form (NURBS) surfaces with a permanently changing curvature, the process of orienting non-symmetric components on the surface is much more complex. Here, the local properties of surfaces, in particular, tangents and normals provide a consistent means to place and orient prismatic members with respect to a surface. The Normal at a node in a reticulated structure is obtained as the average vector of the facets at the node. The Normal defining the local vertical axis of a prismatic cross-section is frequently obtained as the bisecting line of the angle between the two adjacent facets at the longitudinal axis of the section. The direction of this bisecting line can in turn be determined by the vector addition of the Normals of the adjacent facets.

The upper part of Figure 5 illustrates a line model of a free form reticulated structure, which has been complemented with normals defining connectors axes at the nodes and normal and tangents at the midpoints of lines to define the local coordinate systems of structural sections. The lower part of the figure shows in some detail the way in which local entities are used to place and orient structural components on the carrier surface.

The horizontal angle of a member at a certain node depends mainly on the grid configuration.

The vertical angle of a member at a certain node depends primarily on the surface curvature κ = 1 / R in the longitudinal direction of the member.

The Complexity of Free Form Structures

The design of any non-optimized free form, reticulated structure is complex for two reasons:

• The structural behavior is not predictable. Mainly in single layer structures, the stress in the structural members can range from solely tension or compression stress to predominantly bending stress.

Despite the complex design, the number of non-optimized free form structures has increased in recent years, primarily caused by the availability of CAD-programs with powerful NURBS-functions and architectural preferences for formal design without consideration of technical limitations.

The design of a flexible node connector is capable of coping with the changing structural behavior and the varying geometric parameters of the structural members. When constructed well, free form buildings can be structurally sound and aesthetically pleasing.

If you are interested in learning more about reticulated structural design and free form surfaces, Novum Structures can provide information and guidance.

Please wait while you are redirected to the right page...